- August 24, 2019
I always find it funny; When I lived in Atambua (a small town in the eastern area), I didn't feel lonely at all. Physically, I was far from my support system (families, friends), but mentally, I felt connected as my support system and I maintained good communication. When I moved back to Bekasi (a big city near Jakarta), meaning I was geographically closer to my friends, it was getting lonelier.

The emerge of social media significantly changes the way people communicate with each other. Back in 2015 when I was in Atambua, social media was not that hype yet. If I wanted to know how my friends are doing, or vice versa, we would have a call. We had it twice a month at the minimum and could talk for hours. You know, it was such a great feeling to have a talk with some friends after a long time.

Coming home in 2018, I assumed I could go out more with my people as we were in the same area already. But, things changed. Priority changed. In this time, social media became a very dominant tool for everyone. No wonder it was easier to catch my friends on their posts than in real life.

To be honest, I'm the type of person who is not comfortable using social media to know what my friends are doing (my boss said I'm a conventional person, haha). I was just thinking: If we are in the same area (let's say Jabodetabek), Just go meet up, Bitch! By meeting in person, I can see their true feeling, their expression, their body language, and their appearance without the filter. However, some are busy posting their life online while losing moments to keep in touch with their closest offline. It's not wrong. It's their choice.

Another funny thing comes from a friend of mine who now lives abroad. We were chatting, and I asked for some pics of places she has visited. She then told me to open her Instagram account and go see her feed. LOL. You know, I asked it via chatting app because I'd like to give a direct comment, to hear her traveling story in detail, which one is her favorite place, how much it cost, and so on. Simply, a real conversation.

On the other hand, recently I met friends who are not social media darlings. First is my running mate. He said he no longer used social media to help him more focus on his personal goals and be worry-free about other's lives. One platform he's still using is Twitter to keep him up to date on news.

Second is my high school friend who works in Malaysia. We had a nice chit-chat one night and we see that, nowadays, some of our circles are probably posting just to seek validation from others. Their happiness or achievement needs to be approved first by the world. Meanwhile, for us, the real happiness is just there; the time we feel no urge to post.

It's been a year since I stopped seeing people's Instastory. I could say that my anxiety level has decreased. A peaceful and relaxed feeling started to embrace the soul. However, I realize that Instagram is a good platform to learn things I'm interested in. So, I use it to enhance my knowledge by following fruitful contents e.g. Jouska, Kebun Kumara, Kurniawan Gunadi, and Pick Up Limes–using my second account. Thus far, I haven't found any solid reasons yet to use my first account again.

Social media is not toxic, it depends on how you use it.

A Slice of Life

Popular posts from this blog 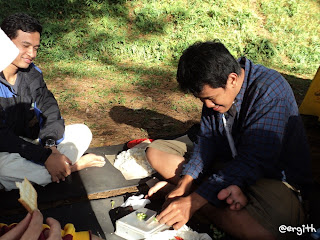